| One of our favorite CG's anywhere

Great mountainside setting, super awesome owners, the best bathhouses anywhere, and great amenities. They have sites with fenced in back yards for dogs and a fenced in dog walk area. Mt Airy is a great place to visit downtown. Devils Den nature preserve is right around the corner.

Nice clean, quiet KOA. Friendly staff, close to good hiking. Small but functional playground. Some of the sites have individual fenced in areas for dogs.

We stayed at the Fancy Gap KOA (site 70) during Oct in a small teardrop trailer. We normally enjoy state parks but this KOA is the first commercial park that reminded us of a state park. It was beautifully landscaped and our site was especially large and somewhat secluded. The shower house near by was individual private residential style full bathrooms and we're spotless. The staff was nice and it's obvious they take pride in maintaining a beautiful campground. Although it's near I-77 there must be a hill that blocks the Interstate noise because we never heard it. It is a gem of a commercial campground.

We stay here on our trek from Pittsburgh to Disneyworld every year. Very clean and comfortable bath house, charming camp store and easy access pull-thru sites. We love this KOA.

Initially I had planned on an over night stayover but the park is so nice with large open spaces, friendly staff and beautiful setting I stayed an extra night. I would defintely stay here again.

Great stop over for us on our way to NC. Very clean, great people and the pizza was really good. It was nice to have a dog area where they could run off leash since they were in the truck all day. We didn't get to explore it very much due to the rain from Irma but what we did get to see was really nice. Like the other posts, don't go by the GPS for directions or it will take you way off the beaten path. Would definitely stay again when we could ventur out more to the surrounding cities. Ask the front office about them.

What a great area... a couple of miles from I-77 and literally just off the Blue Ridge Parkway! If TRAVELING IN A BIG RIG, GET OFF OF I-77 AT EXIT 8; FOLLOW THE SIGN TOWARDS THE BLUE RIDGE PARKWAY THAT BRINGS YOU TO A T WITH HWY 52; TURN RIGHT ONTO 52 SOUTH AND GO ABOUT A MILE; THEN TURN RIGHT (before you get to the stone bridge) AND GO TOWARDS BLUE RIDGE PARKWAY BUT TURN RIGHT IN THE CURVE BEFORE YOU GET TO THE BRP; GO ABOUT 200 YARDS AND KOA IS ON LEFT! We travel in a Class A Diesel with a tag axel and made the mistake of listening to our Rand McNally, which made us get off at Exit 1 (campground hosts said that this happens to a lot of big rigs). We ended up on a steep & curvy road, SR 620. We stopped at one point to assess the situation. A local couple saw our demise and stopped to talk with us. They said if we "made it around that curve back there" that we should have no problem the rest of the way. (They said many RVs get hung up on that curve and have to be towed out.) They drove ahead to provide caution to oncoming traffic, as the road was very narrow. Plus they called a friend to make sure of the height of a bridge we needed to go under. When we drove under the bridge, they stopped and told us to go left and that would put us on the BRP (Rand McNally wanted us to take the next right... Grrrr). We then went about 8 miles and made our way to the KOA from the BRP. We now believe the reason that the GPS in our rig took us this way is because 52 South states no traffic over 8 tons allowed. However, if you turn towards the BRP before the rock bridge, you will not hit the downhills. The Fancy Gap KOA was nestled in the mountain and very well maintained. It is a beautiful property with a swimming pool and fishing pond, nice laundry and bath, and nice owners. If we ever go back, we will request a back in site at the top of the hill. There is a lot of room up there and they are level. They also have larger patios with umbrellas. We were in a pull-thru site, #26, but when it came a massive downpour our electrical connection between the surge protector and plug nearly became submerged. Luckily, we saw it. Site #26 is down the hill and you take on all of the water during a rain. We would not hesitate to spend more time here!

We stayed on a trip to New England, both going and returning. Staff was nice and helped us to our pull thru site. No confusion on the site since we were given the clearly marked campground map and had an escort. It was quiet with only minimal noise from the interstate. That was great since it was so conveniently located right off the exit. We stayed in a motor home and towed our car

Stayed two nights. I usually don't like KOA because the price, but this wasn't as bad price wise. Hook up easy, cable TV, WiFi but only for mail and easy stuff, no streaming or large downloads. Friendly staff. DON'T GO BY GPS TAKE THE ROAD BEFORE IT TELLS YOU TO TURN!!!!

Great pool, great area, clean updated bath houses. Spots are gravel, but up on the hill where we were #78, spots were level. Will definitely be back again.

We checked in at 1:00 pm and went to site #77 which my husband understood D to say. About 8:00 a rude man on a cart yelled and ask our last name. He had a couple waiting for our spot. Said the person had made reservations for that spot because it had a table with umbrella. There was an empty spot at 79 which the 9 was missing. Rather than take that spot we were made to move our trailer in the dark and move to 79. We also made our reservations a month early. There was also a very rude young woman on the cart and she yelled at us also. I will have to say I would never ask anyone to do this. This incident had made me to never stay at a Koa again. They should have someone to take us to our site. Also should have umbrella tables at each site. They was no security in camp and in very bad need of repairs, leaves so thick you could not tell ground drop offs. We camped in travel trailer.

We will stop here again on our travels.

We stayed here based on all the good reviews. When we arrived they were closed but the after hours check in was effortless. Nice park, clean and quiet. Nice wide lots. Although we do not have a dog (yet) I love that they have a fenced in area for furbabies to run off some energy! Nice little cabins available to rent as well. As far as the GPS issues done fellow RV ers had...i used Google maps and it took us right to the location with no issues, Exit 8 off I 77. Will definitely stay again!

Stayed here the night before I took a trip down the Blue Ridge Parkway. The entrance to the parkway is literally less than a mile from the campground. I did not use their facilities, and only used electric so I don't know how wifi or other utilities are. Super friendly staff. Got escorted to my site, and the gentleman even helped back me in! Nice and quiet, and great if you have pets. I paid $70 for the night which I thought was pretty expensive, but it was more than convenient for me.

Great place, great people! It is just big enough to keep our 13 y/o happy yet small enough for us to enjoy.

We stayed here about two years ago in August and had a wonderful time ! Got to pet the local deer and made pictures . This place is soo cool and not far from blue ridge parkway. A must stop place if you are in the area, you might find yourself spending a couple of days here ! 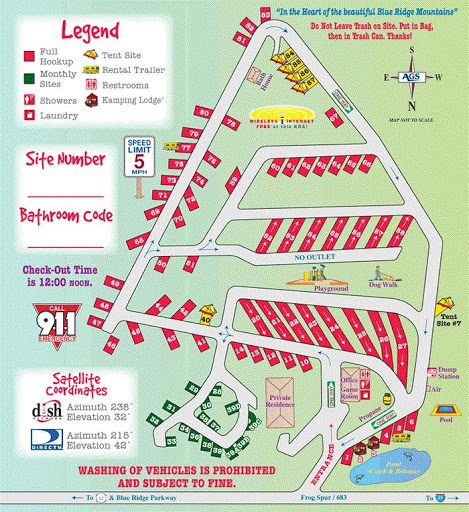