Great Park for RV groups. Facilities were great, meeting room was outstanding. Wi-Fi no problem. Close to shopping for food supplies (our group likes to eat). Rained heavy but with concrete no problem.

Just had our last group meeting and satisfied on the parking, meeting room and other amenities. Only minor complaint was walking the dogs. Problem is patches of stickers and not fun with dogs crying and trying to get them off of paws.

Narrow sites $54.00 a nite very expensive for what you get.

We pulled in to stay one night. The rates are too high for where it is. The help was nice. We hooked up in the last space in the back. It was quiet, and clean. One thing happened there that we felt was quite rude and, it seems our water line connection to our RV had a slight drip... it was a "slight" drip that was noticed by the park "police". The gentleman that wad patrolling the grounds came to us to let us know about the water drip, it was so minimal we dismissed it realizing or washer must need replaced, he had the nerve to press us about when we could fix it. We exclaimed that we couldn't get one right then because we had someplace to be, his rely was, "When are you checking out?" Really? We will never go back there.

Pros: Good location, downtown about 15-20 minutes. Level fully paved sites. Close to shopping. Clean, including sites with residents. Cons: High price for sites $255 week/ $54 daily pull-through. Free internet is so slow does not work at all. No picnic tables at sites. Bright lights in park require you cover your windows.

Clean with concrete pads. Ours was way out of level. $48.00 WITH DISCOUNT for a night stay is very high.

There is no wifi. It will not connect, even standing in front of office where router is. If you don't mind being told that you will have wifi but then you won't have it, then this place is great. I even called and asked the wifi was actually throughout the camp or just by the office and I was told that almost all of the spots received the wifi before we reserved a spot. Maybe we are than some people, but we like being told the truth.

This is a very clean park with nice amenities. I really liked the level concrete pads. It's in a nice location with easy access to the major roads and freeways. My only gripe is that the spaces are pretty narrow. It's a shame that you have some great grass growing between RVs... but if you sit out side, you will be looking at your neighbor's sewer and water hook-ups!

Tried to pull in for a few days paid and went to pull to our spot and was ran down and told to leave be cause our 1998 RV was to old to be in their park. Our rig was and still is in great shape still has all the shine on it. They are so rude I had to argue for 20 min to get my money back. They suck

This is a no-frills park with two very different sections. Avoid spots 61-90. We chose this park because of its high Good Sam ratings and its website materials. Both are misleading. For starters, the pictures on their website are from only the front half of the park. They do NOT show the back half, which is sandwiched next to a commercial building, a motel and parking lots and seems oddly similar to parking in a Walmart parking lot. We were assigned there and were shocked at the difference in perspective. Our rating reflects our experience in this section of the park. To make matters worse, we were assigned a site intended for a travel trailer, even though they knew we were in a 44' motorhome and needed a level site. After multiple tries, and finally salvaging timber from around the site, we finally were able to get our rig level, but the setup was very poor. When we confronted the person at the front desk she did not understand that the site was inadequate. Finally, we spoke to other staff members (and perhaps the owner) who acknowledged the problem and apologized. They had no other spots available. To the management's credit, they did attempt to find us another spot, but by that point, we had made other arrangements. We will not stay here again. 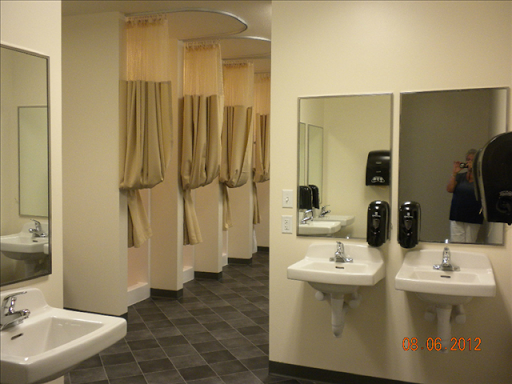 Previous Next
About Amenities Nearby Attractions

We are the newest RV Park in Wichita, with concrete streets and pads with grass at each site. Easy access from any of the major highways in Wichita. Walking distance to shopping and many eateries. We offer a storm shelter that is built especially for Kansas weather. Very close to many attractions and the newest Kansas Casino. We are the only ADA compliant RV Park in Wichita.